At home this weekend for my mom's birthday, I realized that it's much scarier watching The Walking Dead in Atlanta than in New York. Instead of poshly-furnished apartments outside the window, all you can see is pitch-black forest. No ambient city noises resound, amplifying each muted creeaaaaak that drifts up from the basement steps for whatever terrifying reason. Not to mention, most of the zombies we've seen in Walking Dead have technically been Atlantans. It's scarier than watching Poltergeist in a teepee. Small Becky Big Scared. 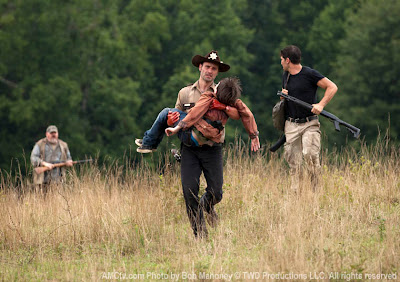 The episode begins back before the Zombiepocalypse, when Lori had to tell Carl that his father Rick was shot in the line of duty. Thank goodness for the primer, because now we REALLY understand the irony of Rick having to tell Lori that Carl has been shot. Standing too close to mythical bucks is a demanding line of work, Mom, and I can't stop now. Why can't women get it through their thick skulls?! Men have to put themselves in danger, if only for vainglory! This theme constantly weighs down on Mr. & Mrs. Grimes: If women have no problem staying with their families to keep them safe, what makes it ok for men to run off looking for adventure? Yet if nobody's out looking for adventure, what kind of outer world can we expect, and how are we to protect our own?

Back at van camp, Dale realizes that T-Dog needs antibiotics and painkillers for his butterflied forearm. Lacking the meds, Dale treats him to a few folksy anecdotes instead. It does just the trick! Full of women, Daryl's search party soon turns into a catfight about certain people's sisters turning into zombies. Andrea grumbles to her companion until she realizes it's a lumbering walker, content to walk alongside her and her grumblings forever. Although it's the only zombie kill in the episode, at least the guy takes a while to die. 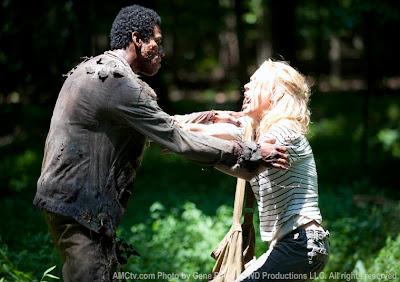 I haven't even mentioned the entirely new set of characters we meet in this episode. It turns out the Big Buckhunter is from Hershel's* Farm, where an old Jewish(?) farmer and his remaining children are holed up. They've got horses and everything, and they'll be fixing up Carl's chest wound (not dead, fart). Hershel's daughter Maggie rides out to Darryl's group and brings Lori back with her, and for the rest of the episode, I marvel at how much I hate Lori. She's so overdramatic. She's got terrible priorities as a mother. She raised Carl, for Pete's sake! If the fruit's weird, you can bet the tree is even weirder. And if people don't already say that, they should.

*Hershel is played by Scott Wilson, who has amazing credentials (his second role was one of the In Cold Blood killers) and is also one of the only Atlanta-born-and-raised actors in the cast. He is now my barometer for the rest of the accents on the show. 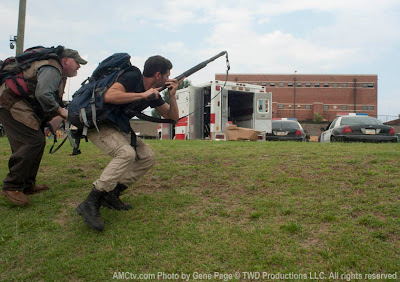 Otis, the huge guy who'd accidentally shot Carl (along with a sizeable-enough deer to feed the survivors for a week...so thank you for complaining even more, Lori), leads Shane on the high school expedition. Said parking lot is full of zombies, and until Shane and Otis throw flares across the lot to distract them, I'm positive they're goners. So many situations look completely impossible until some guy comes up with one bright idea -- it reminds me both of video games and of the justification of mankind's dominion over beastdom. Each day in a Zombiepocalypse is a new puzzle. The surprise is that quite a few of the puzzles are solvable. 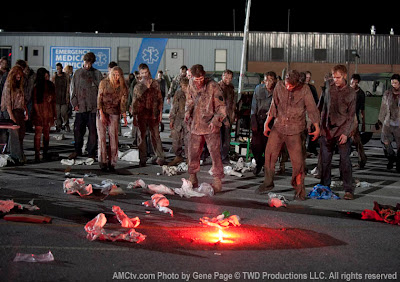 And so we wait for next week to find out if they'll ever find Dummy, if Carl will survive surgery, and if the surgery can even happen, considering Shane and Otis are trapped at school. Who knows, maybe they'll be alright 'cause they're saved by the bell? SAVED BY THE BELL!! Needeloo-needel-oo-EEEEEEEEEEEEEEE-uh!


all photos courtesy amctv.com
crafted lovingly by Becklectic at 3:39 PM No comments:

The Walking Dead Is Back!

It's finally that time of year: ZOMBTOBER!!!!

As you know, Josh's short, Zombie in a Penguin Suit, is now on youtube, and it's taking the world by storm with over 28,000 views. Josh's film also harbingers the Season 2 premiere of Walking Dead on AMC, which took my living room by storm on Sunday night. I was so scared, I was SHIVERING!  Atsa spicy cable zombie show!

The episode, "What Lies Ahead," starts a short time after Season 1 leaves off: Sheriff Grimes's gang of survivors has just declared the CDC dunzo, and now they've got to travel somewhere new in the hopes that civilization still exists somewhere. They choose a fort 125 miles away. All the commenters on nymag right now are like "anyone from the South knows to go straight to Fort Benning" but I'm like "...uhhhhhh?" I have no idea what that is. It's only 2 hours from where I grew up? This is a terrifying wake-up call for a girl who thought she knew what she would be doing in a Zombiepocalypse. She doesn't even know which FORTS are close by! (Becky in The Walking Dead: "Hey, we better head up to Fort...uh...Duquesne?")

On the road, Andrea the Blonde Would-Be-Love-Interest learns how to clean her gun from Shane the Brunette Would-Be-Rapist. This must be symbolic - she wants to learn to use a "gun," and he's already a certified genius at handling his own (in a dangerous way). Thus remnants of Darabont haunt us still. With Daryl leading the caravan on his high-handled motorbike, the gang quickly approaches a road block. First problem: how can they get around it? Second problem: how can they get all these abandoned cars out of the way? Third problem: Surely the dead people in these cars will be waking up V. soon. BUSTED!!!!!!

I shiver violently with dread as the gang searches the cars for food, clothing, and water. Shane finds a Poland Spring truck and acts like it contains infinity water, even though everyone JUST went hog wild at the CDC with that behavior. Any second now one of the survivors will carelessly pass an arm too close to a corpse's mouth, I just know it. The corpses will all wake up at once. We are all going to die.

Instead, Dale sights the beginnings of a herd (I prefer "horde") trickling into traffic while there's still time to hide, and soon it's clear that about a trillion zombies are going to march right into their caravan. Everyone has just enough time to roll under a car or slice their arm wide open and spill most of their blood. Andrea notices the Walkers as she sits next to the open RV window with the door open too, which is a great shot in the episode. Daryl saves Bloody Arm-Dog's life by covering them both with corpses, and Dale saves Andrea's life by tossing down a screwdriver from the roof - she can use it to stab a curious zombie repeatedly in the eye and forehead. Somehow everyone makes it. 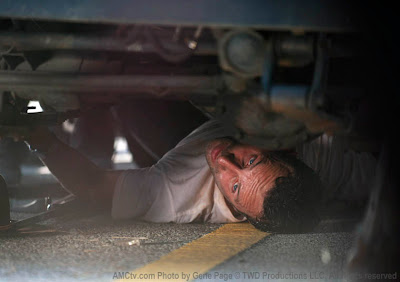 Except of course for Dumb Girl, half of the Would-Be-Child-Couple (which would be a sliver of light in this cold, dark world), who peeks out from the car too fast and calls just TONS of attention to herself as she runs into the woods away from the two zombies that saw her. Didn't the horde JUST pass by? Wouldn't they ALL hear the commotion behind them and turn back around? Hordes form because bunches of zombies hear the same thing and all go towards it together. It's very likely that these zombies can all hear the girl screaming and trampling through the woods.

Rick pulls the zombies away from Dummy and takes care of them with nothing but a rock and good timing - easily the bossest thing Rick has ever done. Unfortunately, he's told the girl to run back to the road instead of having her wait for him right where she was perfectly hidden. She's lost, skittish, and dumb. 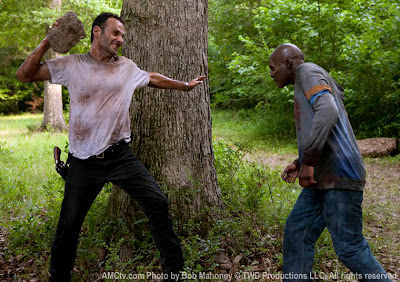 It takes every single survivor to search for Dumbelina, and they don't even find her. Instead Carl creeps up to a mythical buck and nearly touches its unicorn horn...when suddenly a gun blast shoots both of them!!! Hooray, no more Carl! Child actors beware: this blog will hurt your feelings. Carl sucks. He has an air of someone who spends all his time thinking about how to be himself. He looks like Carol should be his mom. Get 'em all out of here!

And so, after two Grimonologues (one to a radio, one to Jesus), we reach the end of the very long episode receiving the "sign" that Rick has been asking for: your son can and will die at any moment, just like everyone else. All bets are off, Grimey!

Just for you, here is a list of Zombie Rules as given by the Official AMC Walking Dead twitter back in September:

Zombie Rule #1: Ability to run is based on the amount of time a zombie has been undead, and how much decay has set in.
Zombie Rule #2: Zombies decay but at a much slower rate than humans, and it's still possible to differentiate between young and old zombies.
Zombie Rule #3: Zombies are like lions: if they've eaten, you can walk by them without fear, but a pack of hungry zombies will attack you. (Good to know. Good to Know...)
Zombie Rule #4: The quickest speed of any zombie is a shambling run. see Night of theLiving Dead. NO sprinters exist. (Also good to know...)
Zombie Rule #5: Zombies are not dexterous. They cannot pick up or use any items more complex than a rock or a stick.
Zombie Rule #6: Zombies have poor eyesight but they do have a strong sense of smell.
Zombie Rule #7: Zombies cannot speak but can communicate by pack mentality.  The herd tends to move together if they sight food. (Jeez!!! Crafty bastards...)
Zombie Rule #8: There is no overt recognition of people or places, there is a sense of familiarity that can dictate where a zombie moves.
Zombie Rule #9: There's no known cause of the zombie mutation, but it's suspected to be a virus or infection.
Zombie Rule #10: Once you're bitten you'll die and reanimate as a walker. How long it takes is related to the nature your bite.
all photos courtesy amc.com
crafted lovingly by Becklectic at 5:21 PM No comments:

ZOMBIE IN A PENGUIN SUIT


7 MINUTES IN ZOMBIE HEAVEN
Over the past few months, Josh has been sneaking off to Boston to shoot a movie about a zombie in a penguin suit. It's finally ready for popular consumption, and I urge you to watch. It is the most spectacular zombie short I have ever seen. But don't take my word for it!

PS Walking Dead season 2 premieres on Sunday. GET READY WORLD WE'RE ZOMBIFYING!
crafted lovingly by Becklectic at 11:03 AM No comments:

Your Garlic Prayers Are Answered


How to Peel a Head of Garlic in Less Than 10 Seconds from SAVEUR.com on Vimeo.

Saveur figured out how to peel an entire head of garlic super fast! I haven't been this impressed since the take-off-your-shirt-in-one-fell-swoop trick (grab the opposite bottom corner and pull).
crafted lovingly by Becklectic at 11:51 AM No comments: