How I Plan To Support The US Olympic Team 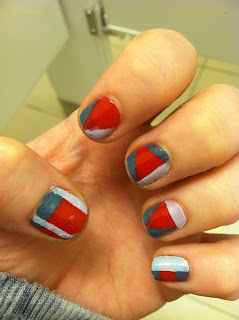 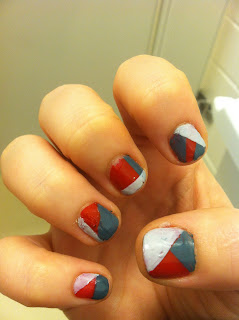 crafted lovingly by Becklectic at 3:23 PM No comments: 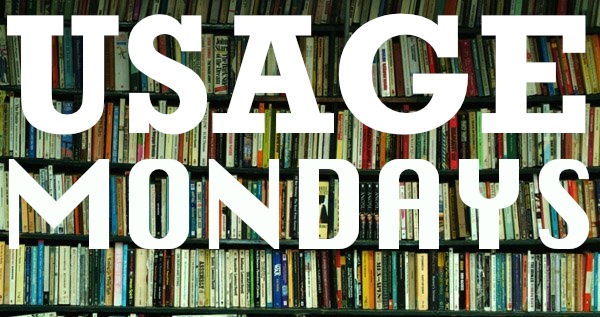 I've had it on my mind for a long time, and I'd like to open up discussion about how on earth we should be abbreviating words like "usual" and "pleasure," as in "the ush" and "my pleash."

Most successful slang abbreviations stick to the letters that actually exist in the full-length word, like "what's the 'haps'" for "happenings." But in the cases of "usual" and "pleasure," there's a shushy "zsh" sound that's hard to capture without spelling out the entire word. If you use an "-sh" to shorten "usual," you end up with a word that looks more like it should be pronounced "[r]ush." To get that zsh sound in there, you'd think that maybe you could just write "uzsh," but again, that looks like it could be pronounced several wrong ways. Udge? Uztch? Adding the vowel sound that comes after the "s" might help, but there's no way to write that. It would look like "us[ua]" or something with far more symbols than the original word has letters. And we could always go with a "yoo-" beginning, but Dear Lord what kind of funhouse would that turn our language into?

I have no idea what would work, and a cursory Google search didn't produce any smart ideas. So I leave it up to you: help me figure out how to abbreviate these tricky, szhushy words, or face the very real possibility of never being able to write them down!!

crafted lovingly by Becklectic at 12:08 PM No comments:

So I leave you with my fond farewell: 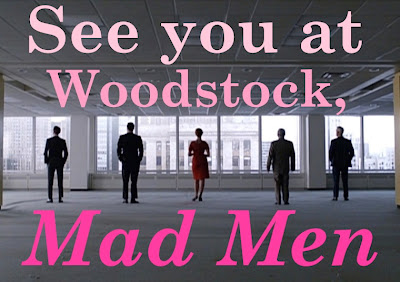 And you should read Matt Zoller Seitz's articles in general, but in particular this week's, because they're great.
crafted lovingly by Becklectic at 11:57 AM No comments:

Sunday night's episodes of Game of Thrones and Mad Men presented their characters with fascinating, if wasted, opportunities. In GoT's "Valar Morghulis," basically every protagonist had to choose between starting a new, exotic life somewhere else vs. staying put in this terrible game. On the flip side, Mad Men's "Commissions & Fees" only followed the consequences of one man's taken & missed opportunities. Let me just put this out here right now: I HAVE BEEN CALLING THIS FOREVER. 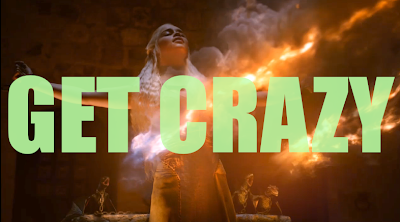 Why does everyone say "no" to everything awesome? Here is a catalog of all the NOs we heard on Sunday:

1) Tyrion won't go to Pentos with Shae, where she's guaranteed him a life of leisure far away from his miserable sister and thankless father. "No thanks," he says. He'd rather keep outthinking the bad men. And keep hoping for the other slash of that X-to-be on his face. 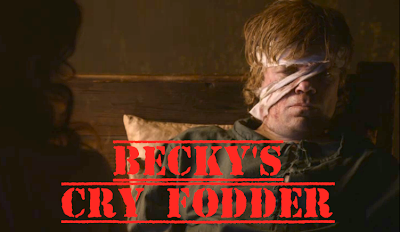 2) First Theon won't go back to Pyke with his sister, even though he's dying for her acceptance, and then he won't go to the Wall at Maester Luwin's suggestion. He'd rather listen to that horn blast over and over again than escape the inevitable defeat coming to Winterfell. Unfortunately for him, the rest of his dwindling army is pretty psyched to go back home. So they clang him. 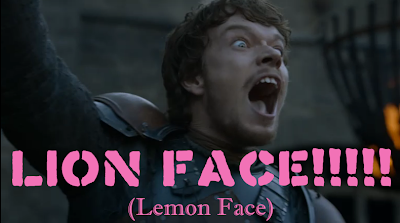 3) Arya won't go to Braavos to become a faceless assassin with Jaqen Hagar. While I understand why a young girl would prefer going back home to becoming a nonexistent assassin, there's basically no home for Arya to return to. She tells Jaqen she needs to find her brother and mother and even her stupid old sister, instead. Luckily Jaqen gives her a thingie and says to repeat some fake-Latin to anyone from Braavos, and he'll appear. But he'll have this face: 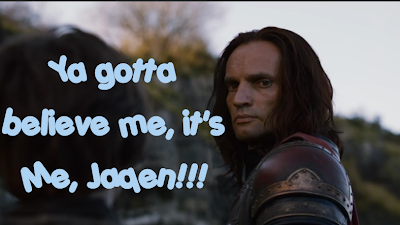 4) First Sansa won't escape King's Landing with the Hound, and now it's up in the air whether she'll try to escape with Littlefinger. No matter how she does it, she definitely needs to disappear from the Red Keep (Joffrey's a sadist, of course, and furthermore I wouldn't put it past Margaery Tyrell to hatch some plans against her as well. She seems thorough). Look at how happy Sansa is to break up with Joffrey: 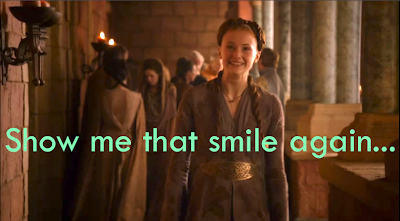 5) Last but most drawn out, Daenerys finally makes it to the House of the Undying. In the magical doorways leading to her dragons, Dany must resist staying where her dreams have come true - first in a snowy, war-torn throne room and then in a tent that holds Khal Drogo and their son. She's most tempted to stay with her family, but eventually she somehow reminds herself that this family is gone. Her dragons, however, are very close. By saying "no" to a number of dreams, she finally gets her dragons back. And they incinerate Freakosaurus Ink Mouth in like .001 seconds. 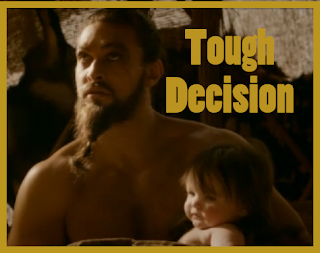 Apart from all the naysayers, Brienne says "yes" to a fantastic adventure with Jamie. She absolutely kills it. I suppose she doesn't have much choice in transporting the Kingslayer to King's Landing, being Catelyn's loyal guard, but maybe that's the key. If you can't control your own destiny, you're probably going to have way more adventures + probs fall in love. Nice! 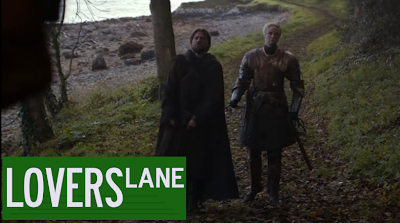 Mad Men
"Commissions and Fees": The Pryce of Success 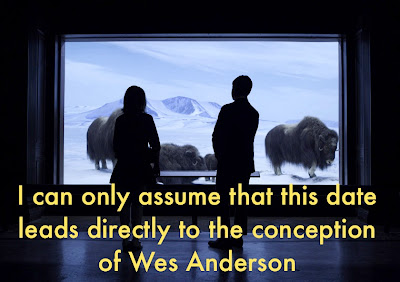 All of the opportunities we say yes or no to come with consequences, and in a show like Mad Men, those consequences can truly add up. "Commissions and Fees" culminates in one very significant consequence, but it doesn't get there because of the choices of one person alone. Everyone at Sterling Cooper Draper Pryce contributes to Lane Pryce's tragic suicide.

Shortly after Lucky Strike dropped SCDP last season, the partners were obliged to invest $50,000 of their own money each to save the business. Lane has been operating at a loss since then, and as we learned a few weeks ago, he owes a lot of money to the Queen. Because Lane's stiff upper lip relies on discretion, he bears all this financial hardship on his own.

I've worked out everyone else's contribution with some help from my brother Matt:
-Rogert Sterling screws up Lucky Strike in the first place and is responsible for the need for the partners to invest so much money. He "says no" to DOING HIS JOB WELL.
-Bert Cooper insists on "saying no" to this year's Christmas bonuses, further screwing Lane over.
-Don fires Lane and shows no signs of bending when he starts crying (an obvious warning sign for someone who does his best never to show feelings ever).
-Pete Campbell systematically dismantles Lane's self esteem all the time because he is a psychopath.
-Rebecca Pryce is slower than molasses and spends Lane's money ridiculously easily.
-No one else at the company really shows Lane all that much respect, which is the least he could hope for, being that he's making practically no money and was integral to the creation of the company. 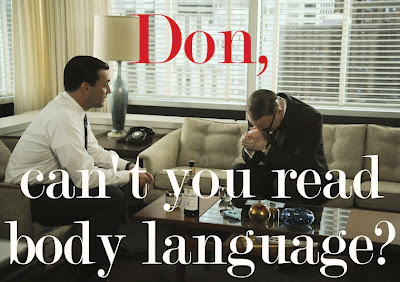 And so the entire office helps Lane get to this point, and it turns out that only the physical office walls are sturdy enough to string him up (that Jag not starting is PERFECT). Lane's suicide, which is something I'VE BEEN CALLING FOR A LONG TIME NOW (either his or Roger's), is a group effort.

Speaking of Roger Sterling, his color imagery is getting pretty insane these days. Naturally I only just now realized that the Silver Fox's last name is Sterling. Wow, Beck. But there's a shot of Don visiting Roger's office that really seals the deal: 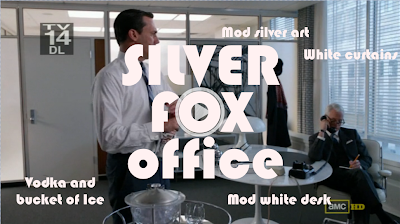 The only things in this office that aren't white or silver are Roger's suit and coat. Oh, and that teensy sliver of wood paneling near the door. But that's it. Even his art is silver. What on earth are we supposed to take from this other than "Roger is old?" Roger is cold? Roger is rich? Roger is undead?

I'm not sure how to squeeze Sally into the it's-your-fault-too schematic, but boy oh boy is she saying yes to opportunities. She jumps at the chance to skip Betty's ski weekend and spend the weekend at Don's apartment. She invites Glen out to Manhattan as soon as she can reach a phone. She's truly ready for action, but unfortunately, action is ready for her too. She reaches menarche at the Museum of Natural History and realizes it's all a little much for her. Back at home, Betty is mercifully non-evil to Sally. She even snuggles her a little. Sally's adventure leads back home, but this version of home is different, like Marty McFly returning home to 1985 at the end of Back to the Future. Because of her adventure, Sally finds a (slightly) nicer mother to live with. 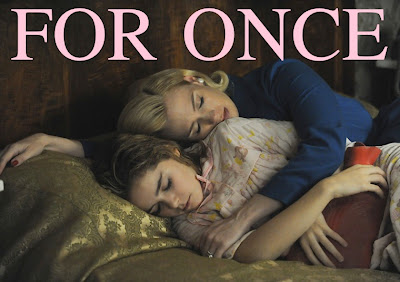 The world of Mad Men allows for precious few mistakes, and in the case of Lane Pryce, every misstep adds up. We can only wonder what will happen now. Maybe Lane leaves his share of the partnership to Joan, giving her a majority in future votes. Maybe Rebecca kills herself, too, or maybe she takes the Jag and drives to Florida to become a salsa dancer. Maybe Roger realizes he definitely can't kill himself now, so he comes to his senses and dyes his hair brown. Maybe Pete does what he was always going to do and goes on a killing spree that lasts for decades. That will definitely be happening, by the way. MARK MY WORDS!


all photos courtesy HBO and AMC
crafted lovingly by Becklectic at 1:56 PM No comments: