I wrote even more Walking Dead articles for Gather, and then I also wrote one about how Taylor Momsen is on indefinite hiatus from GG. Hooray!

If you click these, I will earn money which I will then put towards making gifts for you etc:

1. AMC’s “The Walking Dead” Episode 2 Recap: Escape from ATL
Here is a handy recap for episode 2 of The Walking Dead. You'll like it, I basically promise!

2. Watch Gwyneth Paltrow's Performance at the CMAs: "Country Strong"
This was from one afternoon when I was just like "ok, let's do a trending topic article." Surprisingly, no one searching for this topic on google wanted to read my article.

3. AMC's "The Walking Dead" Episode 3 Recap: Tell It to the Frogs
I think you know what this is all about!

4. AMC's "The Walking Dead" Episode 4 Recap: Vatos!
This is my recap of the most recent Walking Dead episode. It was a doozy. That's a paraphrase from the article itself.

And in the meantime, is everyone watching Glory Daze on tbs? I recommend it, and also I recommend Stankowski. He's a great new television character! Fin.

crafted lovingly by Becklectic at 11:43 PM No comments:

Sometimes You've Got To Ask Yourself Why, Though

Q: Becky! Shouldn't you have written like two other things by now? Probably a gossip girl and then also you wanted to watch the Anne Hathaway snl so you could write about that one in the hopes that it's excellent? I mean it's already gossip girl night right now, again! What are you doing, Beck?

A: Eating as many Thanksgiving sandwiches as humanly possible
crafted lovingly by Becklectic at 7:29 PM No comments:

That Robot Everyone Said I Made Up 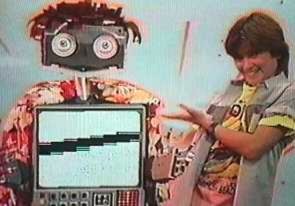 Every few months I find myself trying desperately to describe a particularly obscure robot. "No no no, you remember him," I plead with friends. "He lives in the basement and he has videotape ribbon for hair and I think he looks sort of like Short Circuit? But he talks more like Screech's robot butler. Do you know the one I'm talking about?" Understandably, the answer is always no. No one remembers this robot that would say cool slang things and drink soda pop and stuff. How could they? He hasn't been on tv for 20 years!

But thanks to a recent article I read about fictional robots, D.E.C.K.S. rolled right back into my life. It turns out that he DID exist, and he was on a show called Wake, Rattle, and Roll (until it became Jump, Rattle, and Roll). His best friend was a shaggy haired kid named Sam Baxter (played by R.J. Williams, who went on to work at Full House as DJ's crush, the paperboy). The two best friends would show cartoons to me, their adoring fan, and occasionally call up the stairs from the basement to wherever their mom was yelling about something. Classic!

Upon further research, I'm finding that they had a time machine in their basement but would only rarely use it. Also, D.E.C.K.S. stands for Digital Electronic Cassette-Headed Kinetic System, which is hilarious.

It wasn't just a crazy cassette-headed dream! He did exist!
crafted lovingly by Becklectic at 8:37 AM No comments:

Labels: I told you, The Few Things I Can't Do

So it's public knowledge by now that I found last night's episode of SNL to be actually bad. And I'm never the person saying that SNL was bad. AND I'm never the person who's like "I never think blah but tonight I thought blah." Well, sometimes I am but not so much that you shouldn't take this really seriously.

I've been a fan for so long, for so many punishing years of Nancy Walls and Finesse Mitchell and Melanie Hutsell, and I don't think I've ever been driven to declare an episode totally useless. The cast is usually enough to save the night from total disaster, and if you're lucky there could be an oddball digital short that could turn out to be amazing. But what happened last night? Scarlett Johansson slipped gracelessly between her go-to deadpan-without-any-actual-humor ScarJo persona and a "Millionaire Matchmaker" (but not really at all, since the Millionaire Matchmaker actually sounds like something) fake miserable "New York" "accent." But we all knew she was going to be the lame part of the episode. That's not a surprise. What's a surprise is that the writers apparently let her come up with all the sketches. "Broken Knee Middle School" and "Ceramic Busts" were barely even recognizable as snl sketches (well, the ceramic busts thing is basically on every week, but this time it lacked that certain quality of having funny lines occasionally). Vanessa Bayer managed to be hilarious during "Stars of Tomorrow," even though it was clearly brought in because the writers realized that ScarJo could really only do that little-girl-bad-actress act in the first place (badly). The monologue was delivered so miserably, I could hear John Mulaney writing the lines and then crying them out into the toilet at the same time. God, what a shit show. Oh how horrible.

Other recent SNL topics I wanted to talk about:

1. The return of Shy Ronnie: I TOLD YOU!  In January I had declared that watching the evolution of the Shy Ronnie character was similar to reading John Irving novels. He's getting there...Samberg's got his main character worked out...he knows vaguely what he wants the guy to be doing...he's going to Vienna again...wrestling...Exeter...and there's a dancing bear ok we're done.

To talk more about Shy Ronnie 2.0, I'd say that I enjoyed seeing Ronnie try out a new situation - in this case, bank robbing. It's how he learns to utilize that mouse-quiet-then-gangsta-screamin rap talent. Next it will be him babysitting some children. Mark my words? Either way, it's very exciting to be watching this happen as we watch. Usually these things come into the world fully-formed, but this time we get to watch it find its way. I think that is very good.

2. Hmm, what else has been going on? Let's see, I loved Emma Stone - especially in the "Ta Douleur" French sketch - but was not that "I Broke My Arm" thing the exact same as "Broken Knee Dork Kids?" I still need to finish watching the Jon Hamm episode and I don't think I saw any of the Jane Lynch one. I remember liking Bryan Cranston, and Vanessa Bayer's Miley impression really grew on me throughout the sketch.

3. I'm glad Snooki (and thus Bobby Moynihan) is still around. My roommates and I just added her to our pencil height-chart on the post next to our door. She's a proud 3'6" but the poof brings her just over 5'. T-shirt time!

Oh man that was exhausting. And if you're Scarlett Johansson reading this, I'm sorry I just did all that in public. That's not really fair either. Here, tell you what - I don't brush my teeth as often as I should. That's something about me that's not great.
crafted lovingly by Becklectic at 5:21 PM No comments:

That was easily the worst Saturday Night Live I have ever seen in my life. And it's all thanks to Scarlett Johansson.

I should probably collect my thoughts and write an actual recap, but until then, IS THIS ENOUGH PROOF FOR YOU? THAT SCARLETT JOHANSSON IS TERRIBLE? WHAT WILL BE????
crafted lovingly by Becklectic at 2:23 AM No comments:

I've written 4 new articles this month! If you click through to them, you'll be helping me earn a little spare change for these cold winter months. Oh won't you please help with the spare change? I'd be more than happy to repay you by continuing to post hilarious material on the internet. Do we have a deal?

1. AMC's "The Walking Dead" Recap: Half-Zombies and Half-Seasons
This is my recap of the first episode of AMC's new tremendously scary zombie show. As you can see from my following articles, it turns out I like it a lot.

2. How I Met Your Mother Recap: Canning Randy
This is another himym recap, tailored to your exact interests in the show. Will Forte made a guest appearance in this one. See? I get you.

4. AMC's "The Walking Dead" Google Map Tells You Exactly Where Not to Go (Spoiler Alert!)
This is a hilarious map that someone meticulously crafted based on every event from The Walking Dead comic books issues #1-78. Unfortunately for me, I couldn't really read much of the map because I wanted to shoot for minimal spoilers. I already know too much.

So there you go. If you click them, they will come. The cash, that is!
crafted lovingly by Becklectic at 8:45 AM No comments:

It's Blair's Birthday And No One Is Allowed To Cry

In the words of whomever it was that said "Things are happening!!!" in that sing-songy way that time in whichever movie/tv show it was, things are happening(!!!) on Gossip Girl. I couldn't watch Monday's episode until tonight, which was quite a challenge in an apartment of one television and five roommates on Election Night. But still, I made it. And it's all for you! PS who ended up winning the House? JK Rowling, I know who won. And it wasn't anyone who would approve of Gossip Girl, that's for sure.

PS Did you see Christine O'Donnell's "concession" speech? Where she recounted the list of demands she gave to Senator-elect Coons over the phone? Dummy Alert! You can't make demands when you lose! Even babies know that. Even BABIES!!!!!!

Ok, here is what struck me as notable in this week's episode: 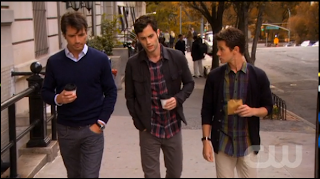 "It just seemed natural that the Humphrey men trade clothes every once in a while." 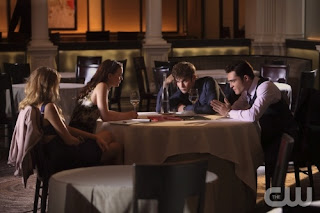 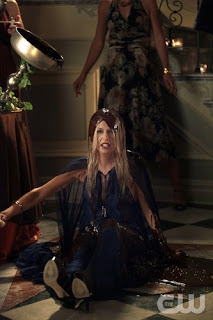 Although she did deliver "I. Die." very well. 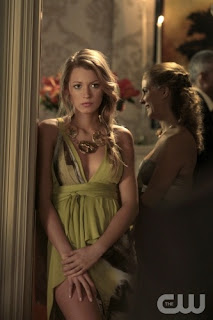 "I'm not sure why I'm upset but I have to touch my leg right now and things should be fine soon enough."
And so concludes another episode of Hate Shtups. That's right, "Hate Shtups" went from being the name of this episode to the name of the whole series. Because that's all that matters at this point. Rufus's parenting style, meaningless. The return of Vanessa, forgettable. The only thing that anyone wants to see anymore is hate shtups, hate shtups, hate shtups, and it looks like next week's episode will be just that. Chuck & Blair's Hate Shtups, the saga continues!
crafted lovingly by Becklectic at 10:12 PM No comments: