This Just In: I Don't Hate Super Fun Night! 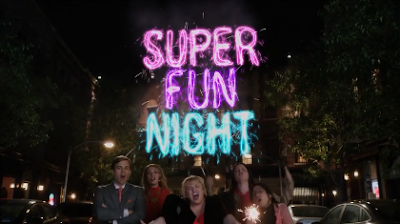 When the new tv season was starting, I decided to skip Super Fun Night until someone (anyone) told me they liked it and I should try it. That happened yesterday, and I watched it, and then I also watched the rest of the episodes available on hulu. Guess what, guys! I don't hate it!

Read more »
crafted lovingly by Becklectic at 1:58 PM No comments:

Walking Dead Recap: "Dead Weight" YEP, YEP IT SURE IS

I think we can all agree that last week's Governor-focused episode was simply NOT enough Governor. So it's a great thing that, with this week's Governor-Part-2, we've now wasted 25% of this half-season STARING AT A ONE-EYED MORON. Congratulations, us! We did it! 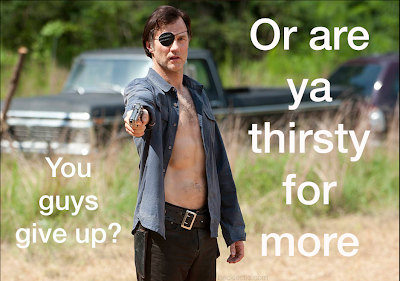 Read more »
crafted lovingly by Becklectic at 4:07 PM No comments:

I haven't gotten to watch last night's Walking Dead yet, but I'm assuming it was a lot like this: 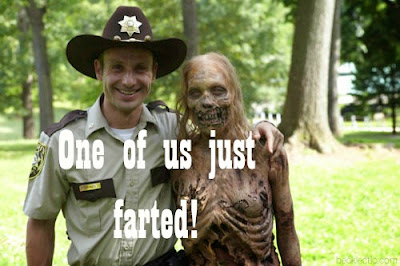 crafted lovingly by Becklectic at 10:30 AM No comments:

American Horror Story Recap: You Haven't Lived Until You've Had A Threeway With "The Dead"

Last night's episode of Amhorst: Coven drove home the real point of the entire show: if you aren't having sex with dead people, you're seriously missing out. They can be ghosts, they can be reanimated bodies, look, WHATEVER, JUST HAVE SEX WITH THEM, YOU IDIOT! YOU HAVE NO IDEA WHAT YOU'RE MISSING!!!!!! SPHINCTER CONTROL IS OVERRATED! 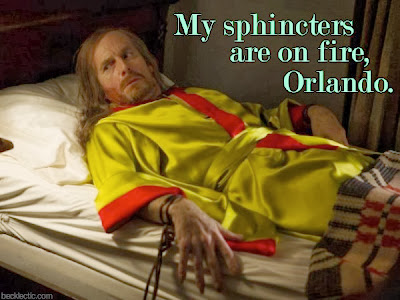 Read more »
crafted lovingly by Becklectic at 1:21 PM No comments:

Remember at the end of last week's episode when we saw that the Governor had come back? Remember how happy we all were to see him and how much we wanted to know what he's been up to all this time? Me neither! 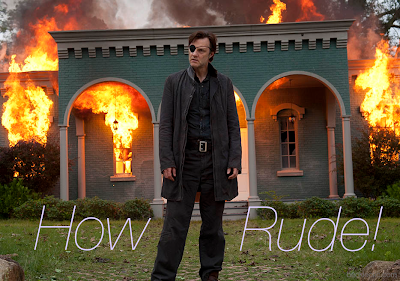 In lieu of a recap, this week's shrine to Amhorst will be a hard-to-read stream of consciousness written while listening to Fleetwood Mac's Rumours: 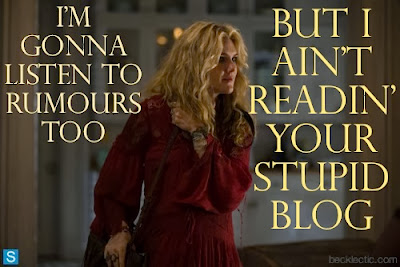 Grace Gummer is a 1919 witch at the academy and the Axeman gets stabbed by billions of girls just like Julius Caesar. He deserves it but now it's like, what is he, a season 1 ghost? Can he hurt people or is he just a phantasm? Also the Axeman is such a stupid name for a murderer, but I guess you can't fault the nineteen-teens for coming up with stupid names. They did name the Titanic and the Great War and Woodrow Wilson. I feel like I went to high school with a kid named Woodrow?

Read more »
crafted lovingly by Becklectic at 11:08 AM No comments: 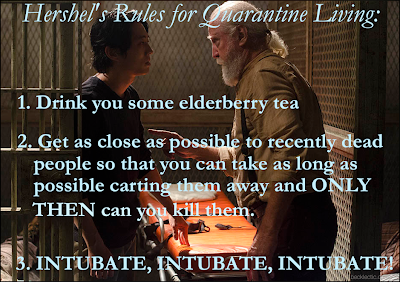 Last night's episode of Amhorst was one huge fever dream. LaLaurie reminisced about the days when she would fill a bowl with real eyeballs and trick boys into thinking they were just peeled grapes. Fiona wandered the halls of that hospital from Walking Dead, looking for pills and stillborn babies to bring back to life. And somebody gave Zoe a chainsaw. I don't know what I'm looking at anymore. 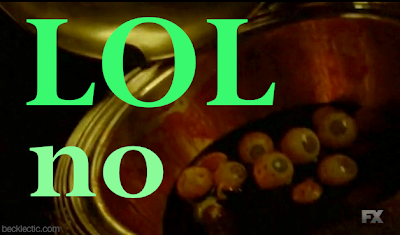 Read more »
crafted lovingly by Becklectic at 1:04 PM No comments:

Walking Dead Recap: There Is No "Indifference" In The Entire Episode

noun \in-ˈdi-fərn(t)s, -f(ə-)rən(t)s\
: lack of interest in or concern about something : an indifferent attitude or feeling

There was absolutely no indifference in last night's Walking Dead. If anything, every character cares too much about other people's business. Daryl gets in D'Angelo Barksdale's face about his latent alcoholism, Michonne (who barely spoke last season) keeps initiating heart-to-hearts with Tyreese, and Rick and Carol spend way too much time chatting up suspiciously benign hippies. I guess if I were in a Zombiepocalypse flu outbreak, I'd want to focus on stupid minutia too. Like why the HELL this zombie is french-braiding my hair instead of FISHTAIL-BRAIDING IT! I WOULD ONLY CARE ABOUT BRAIDS!!! 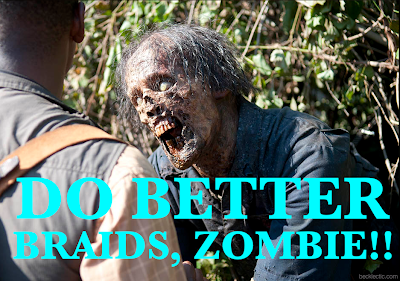 Read more »
crafted lovingly by Becklectic at 5:10 PM No comments: