Living in New York, I come across strange and delightful things every day. Living in 2010, my phone has a camera in it. Et voila! 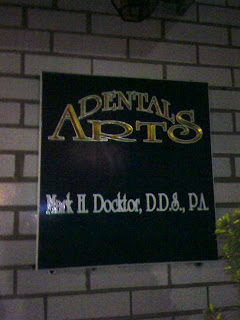 Here is a picture I took in Hoboken. It seems there's a dentist named Dr. Docktor. Fail blog, here we come! 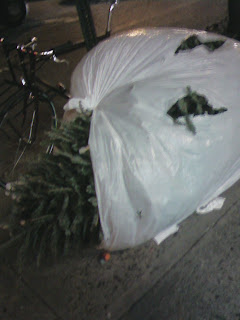 Here is a Christmas tree that was thrown out with the rest of the post-holiday garbage. This represents the fifty other trees I saw hanging out on various curbs at the beginning of January. I thought I would start a collection of those pictures, but then it all got way too depressing way too fast. 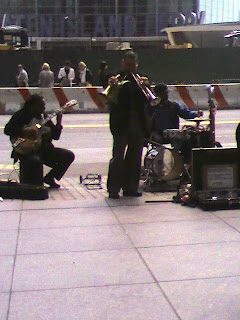 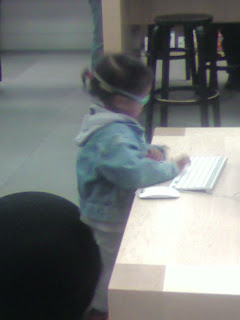 Here is a super cute little girl I saw at the Apple Store in Jacksonville, FL. She is so little, she still has to wear the kind of glasses that are bright blue goggles, like a basketball player. 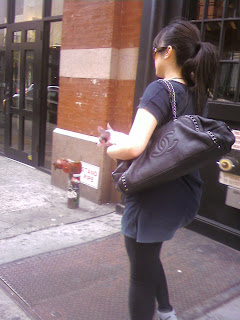 Here is a woman carrying a chihuahua that has been dip-dyed pink. Because everyone knows you don't just walk a pink dog. 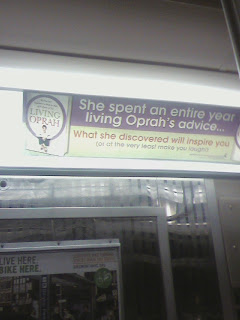 Here is an ad for a book I saw on the subway. Here's hoping it makes Oprah's Book Club! How embarrassing if it doesn't. 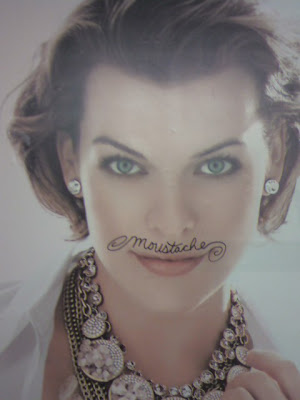 Here is another ad I saw, but this time in a subway station. Milla Jovovich is the new face of some perfume or jewelry (why didn't I take a wider shot?),* and someone has given her a "moustache." I think this is the pinnacle of art, and it might have been the key to the thesis I never wrote in college: understanding humor through its levels of removal, from simple (a graffiti mustache) to ironic (a graffitied something else, or something similarly unexpected) back to this third level of "I know exactly what I'm doing and yet I am not quite doing it" or even "I am doing it more than you know" (the word "moustache" as a moustache).

*It's an Ann Taylor ad! I saw it again last night! 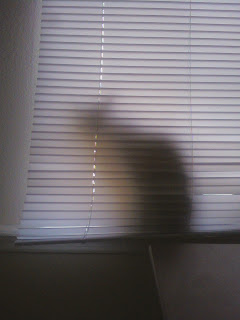 Here is my cousin's cat hanging out between the blinds and the window. 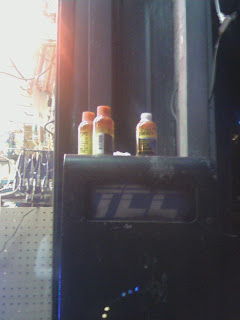 Here is a pay phone (I think) next to a deli with three bottles of 5-hour-energy discarded above it. I believe I could accurately guess what this person's night looked like, just knowing that he chugged 15 hours' worth of energy right outside the deli where he bought them and didn't have the time to throw away the evidence. Godspeed, guy.
crafted lovingly by Becklectic at 1:34 PM 2 comments:

For the past three weekends, I have been lucky enough to find myself in brunch situations. Some have been low-key, some have been in Hoboken, but all have had the self-evident pattern of bacon involvement. Apparently I can't do brunch without bacon. To turn this into something helpful, I've decided to develop a new segment to Becklectic, which I will call Bacon Watch '10.

1. Spring Street Natural: I can't find the exact name of the bacon now that I'm actually looking into it, but I believe it was specifically Applewood bacon or something like that. There was an aptly appley sweetness to the bacon, which was around 75% meat. I enjoyed it, but my memory of it has possibly been compromised by item #3.

my full meal: Bagel & lox plate, side order of bacon, blood orange bellini (why wasn't it called a mimosa, though, when a blood orange is still an orange?)

2. Stacks (in Hoboken): The bacon here was pretty flimsy and greasy. But on the plus side, they give you little bits of cornbread to eat while you wait to order. The plus side in this case is that they don't give you bacon while you wait, instead.

3. Brinkley's: Oh man!!! My roommates and I shared a memorable Sunday morning at this upscale pub-fare bar/restaurant yesterday, and man oh man, the bacon was the best part. Admittedly, the service was reeeeally slow, but when my friend Zach asked for a side order of bacon, they (four hours later) basically brought him an entire side of bacon. It was mapley. It was abundant. It was about 60% meat, 40% fat. It was 100% very, very delicious. In fact, here are a few of the notes I took immediately after deciding to start Bacon Watch '10:

To be fully honest with you, this bacon was the reason I started Bacon Watch '10. I know I said earlier that it was because I noticed how much bacon I eat, blah blah, but even that reason takes a backseat to how delicious the bacon at Brinkley's is. I just want to keep the record straight.

my full meal: Scrambled eggs and bacon, cherry scone, coffee (and a shared appetizer of welsh rarebit, which I enjoyed, but I think their toaster/broiler was broken)


That's the list so far. I intend to keep it going, so that one day this can be a vast Baconpedia for your bacon resource needs. Bacon, je t'aime.
crafted lovingly by Becklectic at 7:35 AM No comments:

Although I took copious notes on last week's episode, I never wrote up a full recap. I will return to it, but it will just have to wait until you've read THIS WEEK'S RECAP!

This week, Blair and Chuck's post-Uncle-Jack fallout was minimal but satisfying, while Jenny continued moronically and vainly to try to lure Nate away from SERENA VAN DER WOODSEN. Meanwhile, Carter Baizen came back into town to make trouble for Serena, and Vanessa was nowhere to be found. Wins for all! And now, here are my notes in list form: 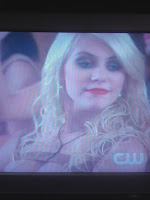 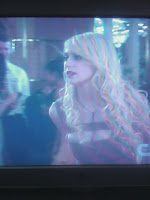 Rule of thumb: If Serena can pull it off, maybe you can't? 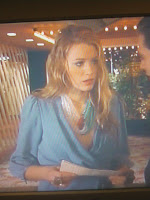 So those are my thoughts on the episode. This was a doozy, if only because both Serena and I were completely shocked to see Lily answer the door of the Dr's hotel room. I mean, I knew she was with him, but it was still a shock somehow. She's there in his room?! She's answering his door?! What's the scoop here?
crafted lovingly by Becklectic at 6:18 PM No comments: 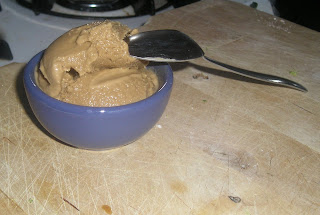 A few weeks into the relationship, I used my manufacturer's instruction booklet recipe for Coffee Ice Cream, only I substituted instant coffee granules with SANKA! 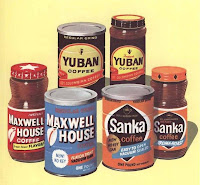 Some of my roommates prefer not to eat or drink caffeine, and it was my pleasure to finally experience the ever-exotic Sanka. 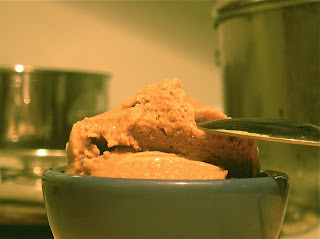 MY FINDINGS.
Sanka: not that great.
Sanka Ice Cream: JUST FINE!
crafted lovingly by Becklectic at 12:49 PM No comments:

The Third Ever Tool Graduation

On Sunday, history happened: the third person to make it all the way through Tool Academy graduated. And to celebrate, he picked up Licensed Couples Therapist Trina Dolenz and shook her around.

The final merit badge of school was Commitment, and Teary Tool competed with Neandertool to prove just how committed they were. First they observed their own Toolvolution in therapy with Cougar Vanessa Hudgens. Neandertool was highly uncomfortable with the prospect of everyone seeing his nerdly younger days, and Teary didn't cry, not. Neandertool then kicked over the television monitor displaying his baby tool pictures, since wrecking costly things is mature behavior at its utmost.

After a super intense therapy session, the tools and their girlfriends relaxed with a little old-fashioned ropes course. Both tools were TERRIFIED of heights, which seems like the one phobia it's cool for tools to have. No way, dude, don't even - heights are way scary, bro. Teary Tool was really, really afraid of heights, though, and he basically peed his pants throughout the entire tightrope walk. Then both tools were remarkably composed for the second course, where they had to climb a pole, stand at the top of it like the Karate Kid, and jump to catch a trapeze. I think there must have been some trick photography there.

In Defending-Your-Tool hour, the girls blandly defended their boyfriends' progress as Trina pretended to listen and mentally compared the tools' naked bodies, part for part. Trina is so transparent.

In the end, Teary didn't graduate, but on the plus side, nobody called him "just a tool." Nice! In the most anticlimactic turn of events ever, Neandertool won the season. He declared that he's not a tool anymore, but I remain unconvinced. Hopefully Trina will deduct the price of their broken tv monitor from his $100,000 check. However! No engagement? No wedding? Things have really changed since the charter season. Skinny Tool and his Gross Girlfriend had to have a Tool Academy themed wedding! Neandertool didn't even have to get a haircut.

Looking back on the entire season, I feel like it flew by. Remember the other wrestler, Chasyn, who took himself out of the competition during the first episode? He was like a muscle-bound harbinger to Project Runway's Maya, whose recent self-dismissal was both unexpected and a miracle for Anthony! Hooray for Anthony!!!

In the end, I'd have to say that Anthony is the real winner. Congratulations, girl!
crafted lovingly by Becklectic at 6:54 PM No comments:

To celebrate Josh's return to New York, the Model Home hosted a killer party. Excellent people came, absolutely no one party fouled at all, and as far as beverages went, we experienced a loaves-and-fish type leftover miracle. Enough to, say, have another party yet?

For refreshments, I made Original Recipe Chex Mix and Hershey's chocolate cupcakes. For proof, I have pictures: 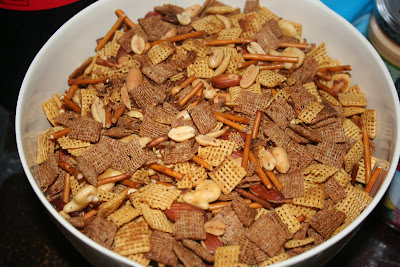 Hello, I am chex mix. 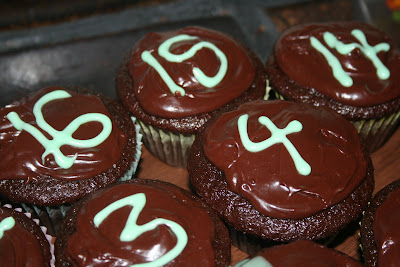 And we are the numbered cupcakes!*

And I am Lars!

*See the cupcakes in a special LOST formation here.

Lastly, I think it's worth it to show off the magazine cut-out "welcome home" message I taped up on our wall as decoration: 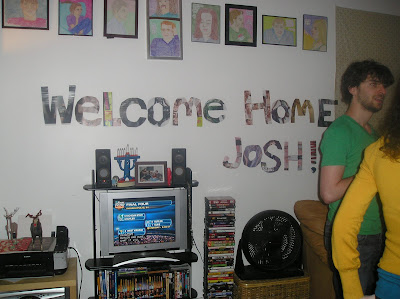 crafted lovingly by Becklectic at 7:20 PM No comments:

Although Gossip Girl aired on the first night of Passover 5770, I still managed to watch on Monday night. It just so happens that I've been mulling over my thoughts for a while, and now that it's almost Friday, I can slide this recap in before nymag recaps its own GG comments section. Dayenu!

As part of Jenny's punishment, Rufus brings her to help out at Eleanor Waldorf's "pop-up fashion show." Danessa becomes self-aware about how boring they are, and Chuck's mom shows us why she was in hiding for so long - she's confused all the way to the freezing point of stupidity. She was in love with two brothers? She uses literal language like "I'm not your mother" to express figurative thoughts? No wonder Chuck's confused! Here follow my thoughts in bullet-point form:
Overall, Monday's episode was one of the lower-energy episodes, even though it captured Chuck's veritable demise. All I'm saying is, Bring On Serena's Dad. Do it! We want Serena's dad! Could he possibly be the one to drive out Uncle Jack? Could Jenny do it? Rufus obviously can't. Blair has been compromised, that's for sure. Serenate will try and fail at least two more times. Who can take down Uncle Jack? Will we have to paint everyone else's door posts with blood and depend on the flight of the Angel of Death? It might be enough!
crafted lovingly by Becklectic at 10:29 PM No comments: