A List Of Thoughts On "The Sacred Taking" and "Head"

4. GAVE HER SON A HOT-WATER-BOTTLE ENEMA AND THEN MERCY KILLED HIM TO AVOID GUILT FEELINGS ABOUT HOW SHE STUFFED A FATAL AMOUNT OF BEES INTO HER CHEATING HUSBAND'S CAR? 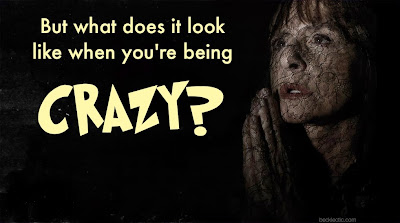 5. I'm pretty sure Misty has to be the next Supreme. Her magic mud is too crazy for her to just be some regular witch. Unless Zoe's the next Supreme, since the show starts from her point of view. Or maybe it's Nan because we're not supposed to see it coming and that'll make us feel bad when we realize we've underestimated her and it serves us right. All I'm saying is Misty seems to be picking up herbology particularly quickly.

6. Delphine's head in a box made me remember the bull-man's head in a box. Whatever happened to him? Was the former revenge for the latter, or are they somehow connected, or are their heads going to be stored together in some warehouse for eternity or WHAT? 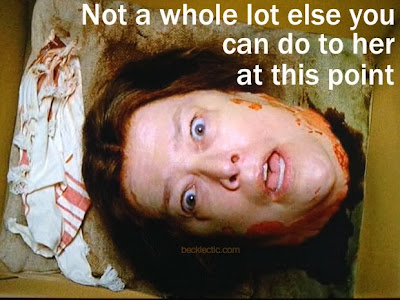 7. Hank the Witch Hunter, what a dummy.

8. I heard someone call this episode the "Red Wedding" of Amhorst. Maybe if somebody were pregnant or something. This was only just a racially charged mass murder. I wish there were some way to bring dead people back to life in this universe.

9. I love the guy who plays Hank's masonic witch hunter dad (Michael Cristofer). He's like if Frank Langella and Kramer had a baby. A terrifying, distinguished, hilarious baby!

10. Myrtle gives Delia her eyesight back by spooning eyeballs out of Beverly Leslie and the lady!!! Noooooo Beverly, noooooo!!!!!!! Why does she chop them up afterwards? And why does she waste her time lying about how she was only paralyzing them, not killing them? Looks like that magic mud can't cure everything. I'M SAYIN' SHE CRAZY. 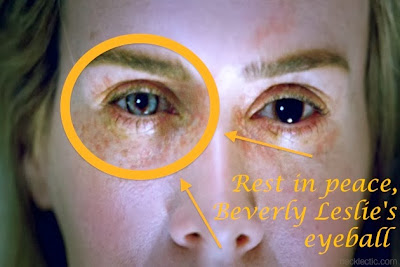 11. Why take Cordelia's new clairvoyance thing away from her so soon? Was she supposed to be a Supreme contender, since she was temporarily good at both plants AND people? Poor Beverly Leslie's eyeball. Poor, poor Beverly Leslie's chopped up body. Wait, wasn't Cordelia trying to get pregnant like 3 episodes ago? And she had sex with snakes? What's going on with that?

13. Who the hell are we supposed to be rooting against right now? Michael Cristofer? Well that's not happening, I love him. The Axeman, I guess. I could see myself rooting against him. I'm also interested in finding out what Fiona looks like without hair. 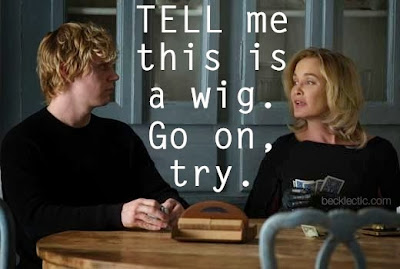 This show is ridiculous but I'll never stop watching it. Even with all the witch-hunting, enema-administering, headless, genocidal Kyle Monsters stomping around everywhere.