After watching last week's Amhorst Coven and missing this week's, all I can say is I have a VERY excellent grasp of what's going on with the show:

A) We're all DYING to know who the next Supreme is (NOT), but the show hasn't brought us any closer to figuring out who she'll be. The search for the next Supreme seems to be the main thrust of the end of the season, but all I can make out lately is a hugely clogged toilet bowl with a Stevie Nicks shawl floating on top. In a world where dead people spring back up a week later, there's no real process of elimination. So we're still at square one, and all five options for Supreme (Zoe, Queenie, Nan, Emma Roberts, and Swampie Nicks) are still a possibility, even though I guess Nan is the only permanently dead one now. Oh wait, plus Headmistress Cordelia? So still five?

B) Remember when Nan was in love with the very hot and sexy shirtless neighbor boy whose mother, Patti Lupone, would give him home-enemas that turned out to be full of bleach? Really missing those good times right about now.

C) The Axeman fucking SUCKS get him out of my FACE

D) This entire season has opened up so many new storylines and background info just to tie all of them up immediately:


1) In the pilot, Zoe's witch power was that she couldn't have sex with a guy without killing him. So she starts dating a dead guy and now it's fully solved. The implication of her ONE defining characteristic is now completely moot?

2) Later on Cordelia's eyes get acid-attacked, and she finds out she can "see" much more without them. But then she gets new eyeballs and loses her second sight, so then she gouges them out again? WHICH IS IT, LADY??

3) I also recall a yard full of zombies during the Halloween episodes. Was that nothing more than a pathetic squeak fart? Entering the world only to dissipate into the murky New Orleans fog before achieving anything?

4) What is Kathy Bates even doing here anymore? Was there ever any use for bringing an actual NONFICTIONAL sadist into this mix? 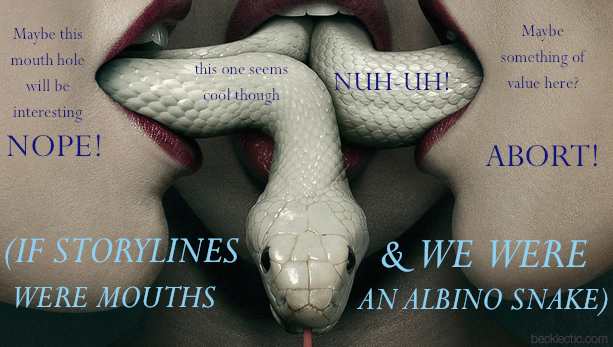 E) So my guess is that the series will end not with a new Supreme taking control of the coven, but with another fucking alien abduction/impregnation/conspiracy coverup that somehow makes Asylum's dumb ending make more sense. Yeah, guys? Yeah?!

photo courtesy of fxnetworks
crafted lovingly by Becklectic at 3:05 PM