The last time we saw the Zombiepocalypse, all hell had broken loose at the prison. The stupid Governor ruined all the fences and guard towers just before he chopped Hershel's head right off. The gang separated and sprinted off in different directions, possibly never to converge again. It was a lot like the time zombies overran Hershel's farm, only this time we hear Rick's broken-ribbed breathing as a soft, zombie-like underscore throughout the episode. Will the gang ever be together again? Or is everyone doomed to take shelter in a billion more Woodbury-type ghost towns? Will Rick talk like this forever? 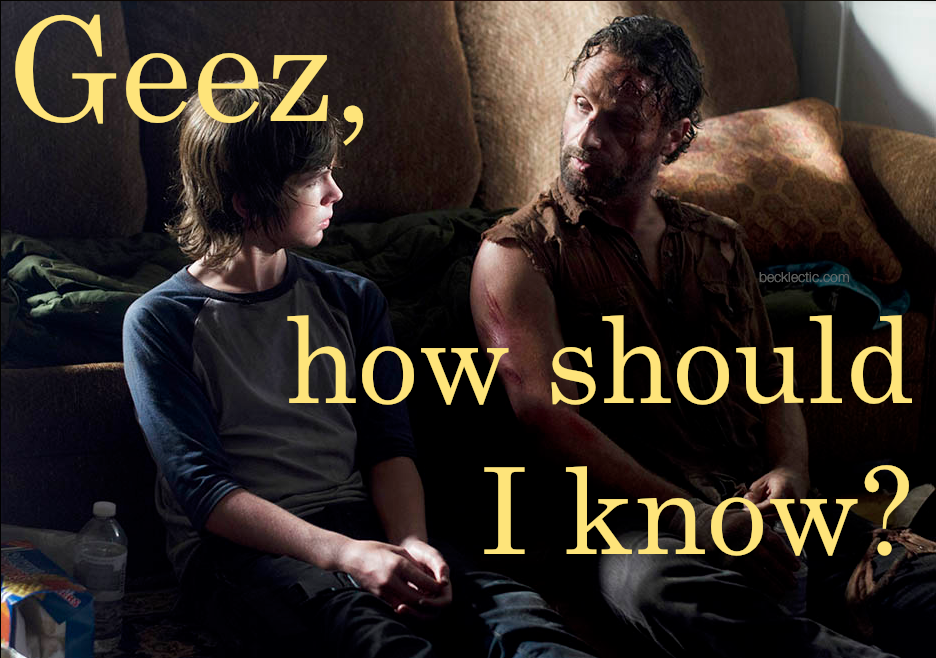 The season 2 exodus from Hershel's farm introduced us to Michonne, which was (and possibly still is) the best thing to happen in the entire series. Just when Andrea was about to succumb to exhaustion, having run all night through the woods carrying a bag of guns, a mysterious stranger wielding a katana and two zombies in chains rescued her. Michonne had removed the arms and jaws of her zombie slaves, exhibiting not only pragmatism but also straight up gumption. To realize that zombies have a harder time sniffing you out when your scent is masked by other zombies? To decide to domesticate two zombies by taking away their weapons (arms and teeth)? To actually get in there and remove those body parts without freaking out and just killing them, instead? That's some grit. Plus they made great pack mules. Michonne's the best. Just look at this follow-through: 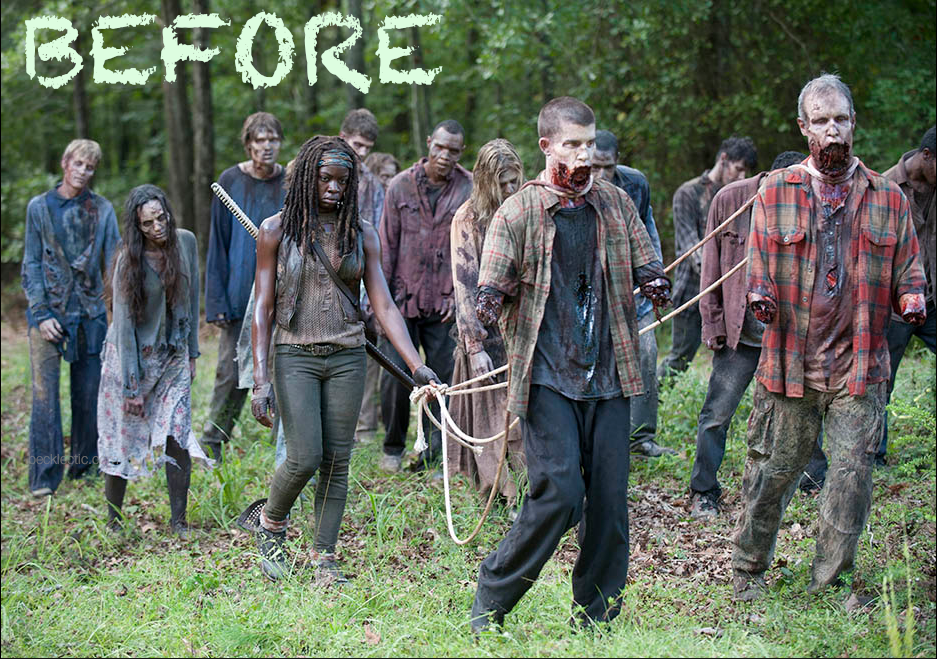 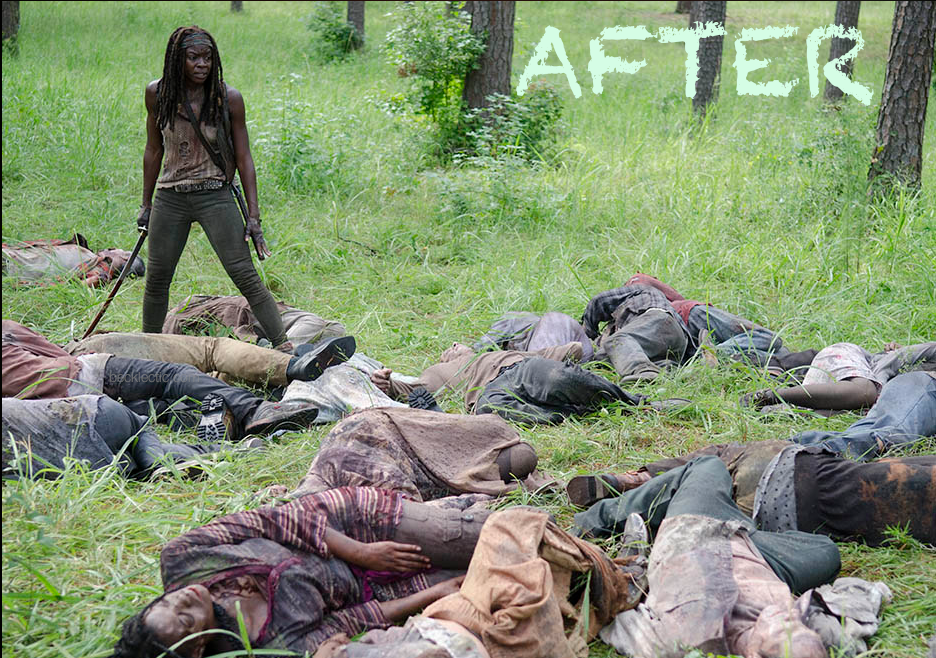 What we find out in last night's episode is that, even though she's capable of making new zombie slaves at any time, her first two were people she knew before the outbreak. Through a dream flashback, we see her talk about some shitty play she'd just seen with her lover Mike (Hardison from Leverage) and their friend(?) Terry. She and Mike had a son, who was killed or eaten or reanimated at some camp early on in the Zombiepocalypse. All this flashback information feels really fulfilling, scarily close to how I used to feel watching Lost. I'm even hoping next week shows two more survivor stories with flashbacks and ultimately happy reunions. Am I a glutton for punishment? No, not this time - because Walking Dead is doing what Lost wanted to do (BUT DIDN'T DO). It's a character study. There's no final mystery to be solved - these zombies are here to stay, and it doesn't matter how they got here. So show me all you want about these crazy supernatural monsters! Show me all you want about how the past led these people here! I WON'T BE FOOLED AGAIN! I WON'T HOLD OUT HOPE FOR DEEPER MEANING! LOST TOOK AWAY MY INNOCENCE! DAMON LINDELOF I AM TALKING TO YOU! 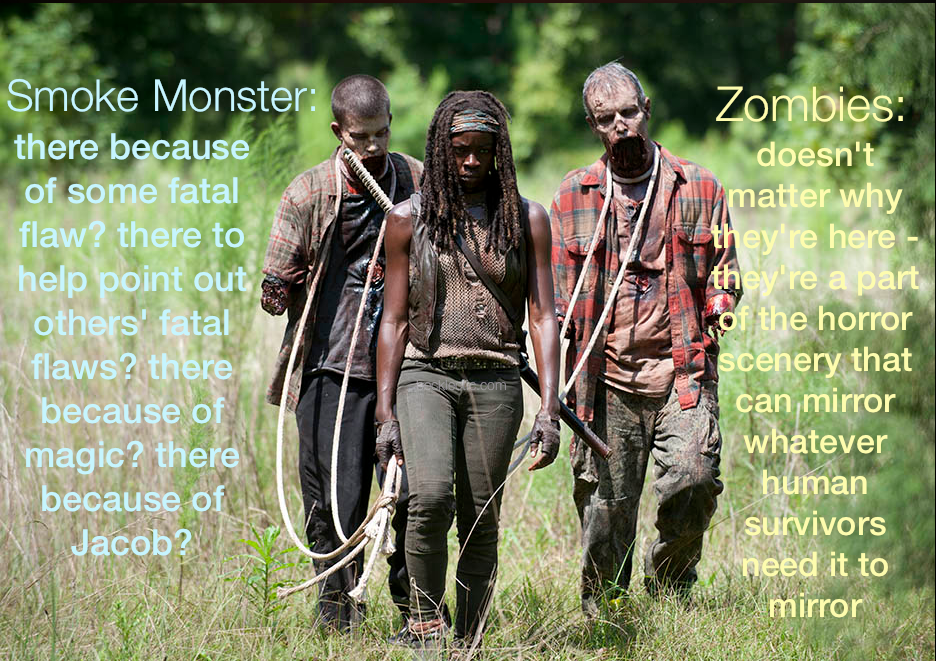 I had hoped in vain that Carl would continue to be as awesome as he's become. Instead he's still grief-wasting bullets, and he's somehow gotten worse at aiming. He's pissed at Rick, who's still super roughed up from when the Governor beat him senseless the other day. The gravelly breathing has done nothing to keep Rick from nagging Carl to eat something, to stay close by, to let him be the one to kill the less aggro zombies. Obviously this new relationship dynamic makes Carl want to break free as soon as humanly possible. And obviously Carl finds himself unable to protect himself when he's on his own for 10 minutes. 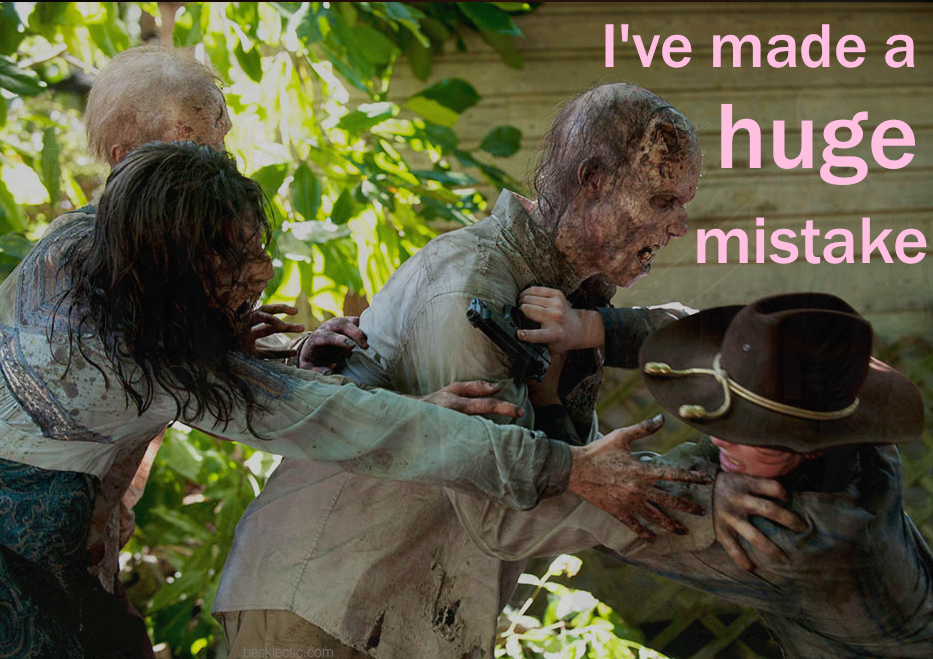 It's pretty great to watch Carl exist without dialogue getting in the way. Watching him check out the boy-king-palace bedroom, then resignedly rip out the tv cables to use as rope - that's great stuff. Watching him sit on the roof eating every last ounce of the hugest can of pudding I've ever seen (pudding comes in cans?) while a zombie tries to reach through the window behind him - that's also great stuff. Listening to Carl talk to his possibly dead/reanimating daddy about how he don't care if he lives or dies anyhow - that's dumb stuff. Maybe they should do a dialogue-less episode. 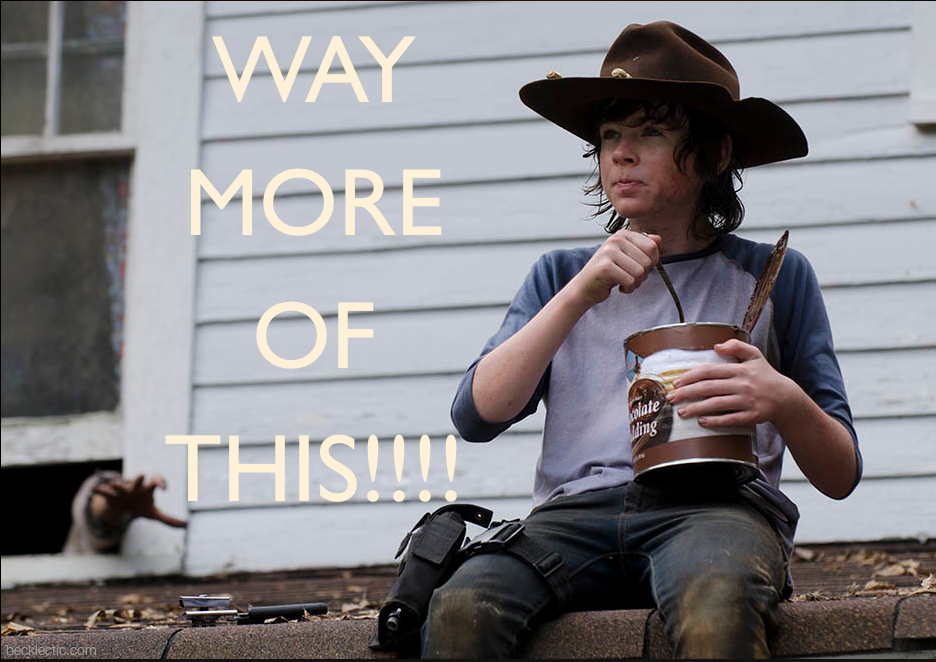 Michonne's been sauntering along in the middle of a smallish zombie herd, protected by her zombie slaves but clearly haunted by her dream flashback. She keeps trying to make eye contact with another dreadlocked black lady, but that lady has no brain waves anymore, so Michonne comes to some sort of turning point. Maybe she realizes that she's alive until she's dead, so she better be alive and WELL. Maybe being reminded of another time she was a lone survivor had made her think she should just be alone forever, until she realizes she'll never be as alone as that Zombie-Michonne. Maybe she's just amassing enough zombies to have a real Kill Bill-style group attack (see "Before" and "After" above). Whatever it is, it's enough. Michonne's ready to find her people. 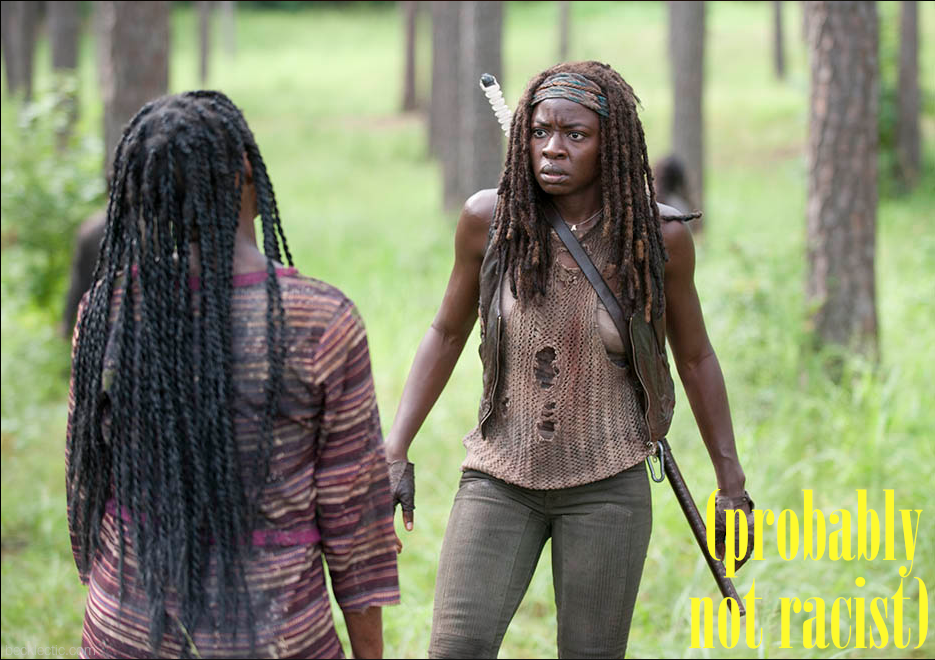 Luckily she's as excellent a tracker as young Kate Austen, and she tracks down the pudding-eaters pretty quickly. Watching her spot Rick and Carl through the window and then cry - that's great stuff. I'm serious about these wordless scenes being the best. MORE OF THOSE PLS!!!!!!!!